Sky have released this Christmas 2019 Advert where we see a short sequel to Stephen Speilburg’s E.T. (The Extra Terrestrial). Quite possibly one of the greatest films ever made and this is one of the best Christmas ads to match 37 years later.

In the advert video we see Elliot now grown up with a family (Elliot is played by the original actor from the film). His children are playing outside at night in the snow. They find E.T. lurking behind a snowman. After all screaming (like in the film) their concerned father rushes out and then instantly realises that his long lost friend E.T. has returned for Christmas. ‘You came back?’ he says.

After intoroducing his family to E.T. they go indoors to show him the internet and virtual reality. Later E.T. shows Elliot that he has a wife and child of his own and needed to get back home. This is where we see the climax of the video. The iconic scene of riding bikes in to the sky is re-created once more where the group travel to the spaceship to the classic, familiar John Williams soundtrack.

Sounds Familiar congratulate Sky on this fantastic moving Christmas advert for 2019. This will be a hard one to beat in years to come. 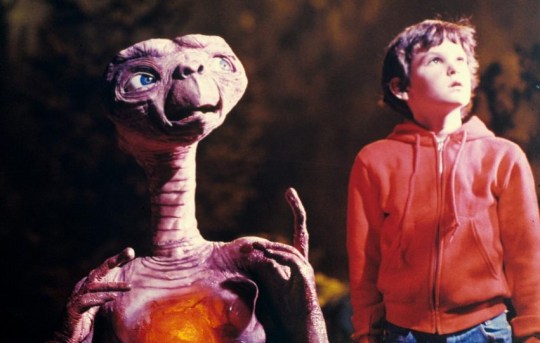 E.T. the Extra-Terrestrial was a science fiction film released in 1982 produced and directed by Steven Spielberg, and written by Melissa Mathison. E.T. became an immediate blockbuster, surpassing Star Wars to become the highest-grossing film of all time – a record it held for eleven years until Jurassic Park, another Spielberg-directed film, surpassed it in 1993.

The music in the Sky E.T. Christmas Advert is taken from the original film score for the Stephen Speilburg film The Extra Terresrial recorded in 1983. The score was composed by John Williams who collaborated with Speilburg for many of his films. The music from the advert and the whole film score can be downloaded on iTunes and Amazon Music.