In the latest Samsung Galaxy ad, a YouTube video titled Growing Up, we see a man who has been on board the iPhone train since he first happened upon the queues extending for blocks when the original model was released back in 2007. He was so thrilled when he got his phone that he immediately called his friends, asking them to guess what he had just purchased.

However, in the ensuing years, the iPhone’s shortcomings have become more and more apparent to our hero. From the fact that they can’t take a picture with full storage, to the tiny screen -particularly in comparison to the Galaxy- to the fact that he is using dongles for headphones as he looks enviously on as his partner uses her Galaxy’s wireless charging. Something that Apple is only now investigating in a much bigger way.

Finally, by 2017, he has reached his limit, and, using the Live Message option on the Galaxy he’s just unboxed, he asks his friends to guess what he’s just purchased, coming full circle. He then goes for a walk, passing the long queue for the iPhone X, making eye contact with an iPhone devotee and cheerfully walking on, away from his previous obsession. All of this unfolds to the tune of I’m Moving On by Chyvonne Scott.

This advert highlights how Apple has consistently been a day late and a dollar short with each version of its iPhone over the last ten years as compared to other smartphones, from the headphone jack through to waterproofing.

The iPhone X, or 10, is scorned up to, and including the final scene, where we see another long line of loyalists outside an iStore. One of the zealots even has a haircut that looks like the Apple notch.

Growing Up is not the first slight Samsung has made against Apple. Back in 2016, the firm, based in South Korea, derided its rival’s phone as it launched the Galaxy Note 7, but here it focused on the fact that there was no jack for headphones, something that even Apple loyalists complained about.

Going back a little further reveals that Samsung released YouTube videos in 2013 and 2014 that mocked Apple watches and smartphones as well. 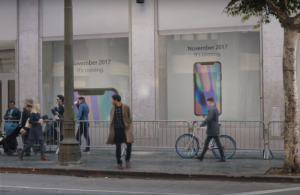 Apple’s Not Too Worried About the Jeering

Samsung’s Galaxy Note 8 launched quite a while before the iPhone X from Apple, and it provides dual rear cameras complete with dual OIS, and an enlarged 6.3 inch OLED full display with an aspect ratio of 18.9. It also has a far bigger battery than the iPhone X -although Samsung doesn’t want to get too caught up in talk of batteries after the fiasco of the Galaxy Note 7!

Apple is probably not too troubled with the sneering, however, thanks to the new model iPhone already selling out. And a new trial is coming up to determine how much Samsung should pay Apple after copying the iPhone’s look and features-imitation being the sincerest form of flattery? To add irony to satire, Samsung has a vested interest in the success of the iPhone X, thanks to the fact that the company supplies the NAND flash, the DRAM chips, and the OLED display!

Apple’s Response to the Battery Scandal

In other Apple-related news, the company made a rare public apology in the wake of a recent disclosure that it was slowing down its older phone models through software updates. Many Apple customers believe that this was a violation of their trust, although Apple insists that it’s just because that’s how older batteries work.

The music in the ad is called I’m Moving On by New York based soul vocalist Chyvonne Scott and can be downloaded from the links below.